Updates & Status
I now have my first wind divine, Eurus, since around 22:00, 10/04/20. Took me four Horns of Plenty - thankfully one was for daily goals and another one I found in the third horn I opened, but I now have my first divine baby. So this definitely made my otherwise less than stellar week better. 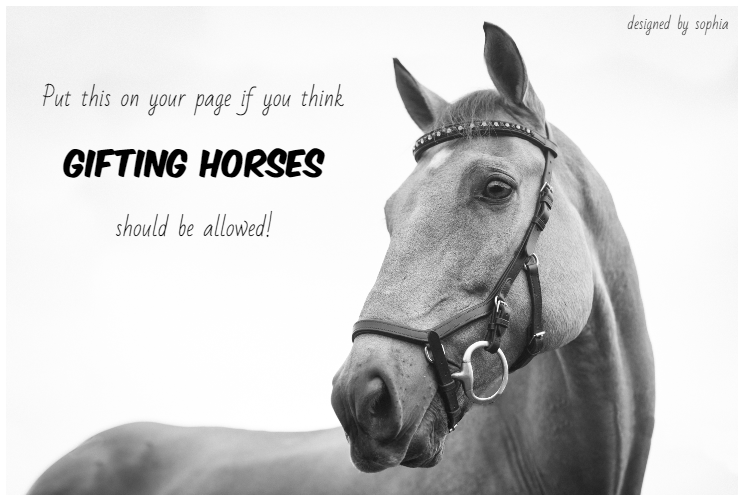 Howrse - Breeding & Horses
My greatest achievement thus far is breeding and raising Katherine (Midnight Marvels) who on the 21st of December, 2019 ranked 5th in the top pure Selle Francais in Dressage (skills).
10th May, 2021 - Megara (Midnight Marvels) finally managed to make it into the top 100 horses in terms of her victories in trot. I intend to get her into the top 50 or even 20 someday.
24/07/2021 - Megara is now amongst the top 90 horses in overall victories in trot.
29th May, 2021 - Anima (Midnight Marvel) achieved number 1 spot in dressage amongst the Selle Francais with 5210 in dressage.
Rankings - Competitions
19th - Competitions Won Yesterday - ( 205 ) - 7th January, 2020
Personal Reminders:
Nadya
Ardenia
Symbols
Roleplay & Advertisements:
Interesting Role Plays

Feel free to call me Ghostly, or Haunts. I go by the pronouns she/her or they/them, but I'm not fussed about people somehow confusing me with a guy... as long as you don't also mistake me for "nice".

I'm not big on favours, and especially when people are given an inch and then take a mile. So, while you can ask me for favours, don't beg, don't guilt trip, don't manipulate, bribe or guilt me into doing favours for you.

Oh, and I was also born in Czech Republic, so I do read and write Czech... but prefer to stick to an English keyboard which makes writing in English easier than in Czech.
Game Play:

I have played this game on and off for a while, and my first account was made on a different server around 2012, but that account had since basically died off due to inactivity.

Now, I mostly play the actual game for leisure, despite every now and again breeding up ribbon winning and top 100 comptetition winning horses.

I specialise in Selle Francais and Holsteiners, but even so I don't breed them very compeitively - at least, in the sense that they'll never get far in Grand Prix competitions or win the most rosettes.

I do participate in events but I refuse to throw in too many - and sometimes any - passes.

I'm no expert in this game, but if you do have some questions about this game, you can always PM me - maybe I'll be able to answer. However, I also plan on writing up some "How To" type guides in my forum.

I don't sell any horses that have a Philosopher's stone. Those crystals are expensive as heck for me and hard to come by, so there is no way I'd ever sell an immortal horse. I also won't sell divines, golden apple horses, female unicorns and most female horses. This might change in the future, but for now, please don't ask. Male unicorns I might consider selling except for draft unicorns.

I do have an equestrian centre - as you might have noticed, but I'm currently struggling getting up my competition prestige. So if you'd like I could help you with your competition prestige (assuming I have the right horses for the job) if you help with mine...? PM if you're willing to partake in such an agreement.
I
Hobbies:

I'm a person who can't seem to find enough of those. So, on the one hand, I never really get bored, but on the other, I never have enough time to do everything I want to do.

For instance, I love reading and writing, but there always seem to be just so many books out there and so many ideas I have for books that I simply can't choose or even follow through on everything I've planned to read/write. I also enjoy drawing/painting - both digitally and traditionally - but once again, can never decide where to start first. I've always wanted to learn how to animate, but I'm still working on the basics of digital art and editing.

I also enjoy listening to music, and have always wanted to learn how to play a musical instrument, but, frankly, I'm terrible at it (at least from my experiences of music in highschool) and don't know the first thing about most instruments... so I guess I'll just stick to listening to it instead.

Most genres of movies, cartoons and anime I like, but I certain gun and car movies - like John Wick and Fast and Furious - just aren't my thing and I've never been interested in watching Star Wars or Star Treck. But I did like some of the Jurassic Park/World movies. Disney, Dreamworks, Marvel and a lot of BBC and Warner Bros movies/series are amongst my favourites.  But you'll probably figure out some pieces of fiction I like simply by looking at my horses. XD
Roleplays:

I am also a role player who prefers to refer to role plays with long responses as "detailed" instead of "literate". Please do not ask me to roleplay unless you are willing to play out the Mereoleona x William ship from Black Clover. Currently it's my comfort ship and it's my main condition for roleplay. Everything else is secondary. And yeah, in return, depending on your ships, I might be willing to play out your pairings - canon, fanon, original, b x b, g x g, b x g...
Ple